Where are the cars and taxis in Disneyland? 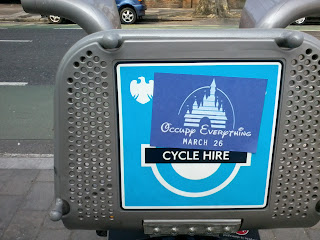 From Royal Weddings to Olympic Games, the London Eye to Big Ben, the British Museum to Hyde Park, it is hard to envisage central London as anything other than a massive theme park - a delight for its residents and tourists alike. Except that a significant off-kilter aspect of London that proper theme parks don't have is the preponderance of noisy, polluting, space absorbing motor traffic.


But much of that can be designed out. The bicycle replaces the car; B-Bikes and Pedicabs replace taxis and minicabs. A similar hire system to B-Bikes could be introduced with mobility scooters for those unable to use these.

Deliveries could be slashed (maybe fanciful, but how about banning consumable crockery in central London for example - you lose a load of waste refuse collection as well as delivery vans. If you install taps and water fountains rather than bottled water sales outlets you can dispose of thousands of lorry journeys).

There are two posts other bloggers have written today that I urge you to read:
http://waronthemotorist.wordpress.com/2011/03/27/streets-versus-democracy
and
http://ibikelondon.blogspot.com/2011/03/why-mayor-and-tfl-are-wrong-about.html
- check out the video on this and imagine if the private cars and taxis in the clip were removed. How much saner London would be.
Posted by Charlie Holland at 15:08