I'm leading a ride for Cyclists in the City and I bike London bloggers on Saturday at 10.30am, from St Mark's Church on Clapham Road opposite the Oval tube station, around the ten locations with the highest number of collisions involving cyclists - the Elephant and Castle northern roundabout being top of the list. I urge you to come along, bring your kids and your grannies - As Boris said yesterday in Mayor's Question Time, "If you keep your wits about you, Elephant & Castle is perfectly negotiable."
He also said, ""I want people to feel confident. The cycle superhighways are about building confidence." 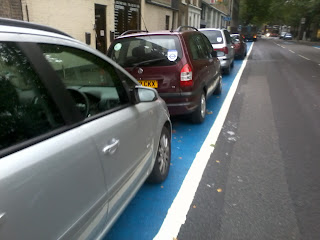 As an experienced motorist, cyclist, cycling instructor and trainer of cycling instructors I'd like to say that the E&C and the majority of the Cycling Superhighways are bloody awful for cycling - which is why you hardly see any secondary school children,  especially girls, cycling there.
Most of the motorists I know dislike many of TfL's roads and junctions, and they've undergone loads of training and a test! So what are the odds of your average soft, squidgy person who can't drive merrily pootling around these roads on bikes? Bugger all, and around here a huge number of households don't have a car. The Guardian recently reported that, nationally, the percentage of 17- to 20-year-olds with driving licences fell from 48% in the early 1990s to 35% last year. I bet it's nearer 20% locally so it's pretty damn optimistic for Boris to think that these people are going to be confidently cycling around the gyratories.
Does Boris really believe it's just lack of confidence that has the Head of Notre Dame secondary girls' school on St George's Road refusing to let her girls cycle to school? Or do you think it's because this is the road on which the school has its entrance? 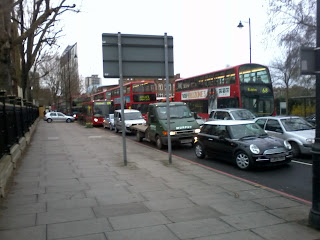 Does Boris think the Head of Lilian Baylis Technology School on Kennington Lane, the edge of the congestion zone (below mid-morning) as it leads into the Vauxhall Gyratory, is completely deluded when he tells me that he suspects the challenge of these roads acts as a major barrier to his pupils cycling and their parents permitting it? 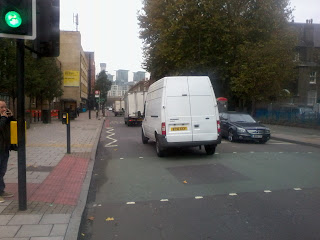 The off-road cycle option for the Vauxhall Gyratory is fragmented, obscure and takes forever to use. The semi-decent bit, if you can get to it, is used each day as a parking bay for the Tesco metro there (like the driver below today)  and I bet no-one has ever been fined for it. 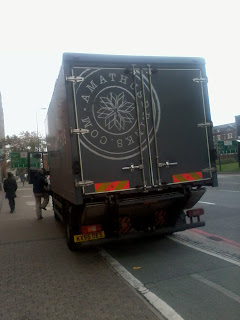 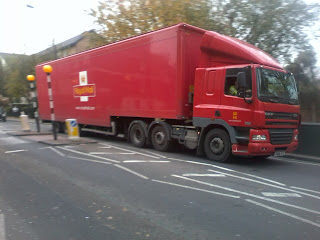 In the world of Boris, is London Nautical secondary boys school on Stamford Street (above today) wrong in preferring that their pupils don't cycle over the Thames bridges to school? Can Boris really believe it's not an issue that the cycle lane on Waterloo Bridge disappears due to a pavement build out just as people zoom downhill to the roundabout? 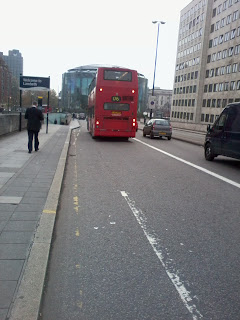 Does he really consider the alternative route to avoid the foul Imax roundabout to be adequately signed? 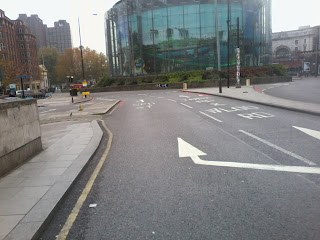 And is the entrance to Waterloo Bridge off Upper Ground obvious to cyclists? 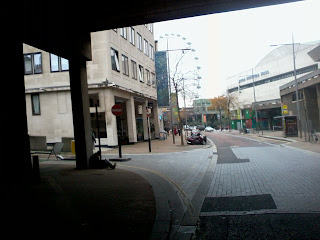 I know the teenage kids at these schools. Like any teenager they'll take the quick and easy option, not always paying total attention and sometimes being awry in their estimation of speed, position or intent.

In the Netherlands they work really hard to make the route for cyclists friendly, obvious, direct and safe, subjectively and statistically, because they want their children to cycle and they recognise their vulnerability.

Here Boris just tells the boys and girls to grow some cojones and jump in front of the HGVs.

Please join the ride to protest against his arrogance and TfL's apathy. And see if you can drag along one of our Councillors, none of whom have replied to my invitation. Finally, check out and share this short BBC newspiece
Posted by Charlie Holland at 14:35