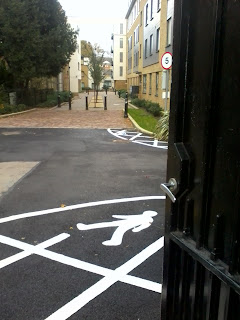 Given that both Lambeth and Southwark Councils are keen to promote walking and cycling, and that some half of all households here don't have cars, you'd think that new developments here would be at the vanguard of active travel. As the Dugard Way development, on a former NHS property, shows, the reverse is the case.

This development provides the only non A-road link between Lambeth and Southwark at this point (and in fairness, one that didn't exist recently, though a convenient alley was in place further along a few years ago). This should be the perfect route for local pedestrians and cyclists to avoid the traffic, noise and pollution of Kennington Lane, the inner ring-road around the congestion zone.

Dugard Way in Kennington is a little semi-gated enclave where the developers seem set against nurturing active travel. The ever-shut pavement door has the toughest spring closure you're likely to encounter, while the on-road entrance is unobstructed during the day. A pavement has just been painted the other side of the door, and a ridiculous zebra crossing added that I doubt I'll ever see being used. 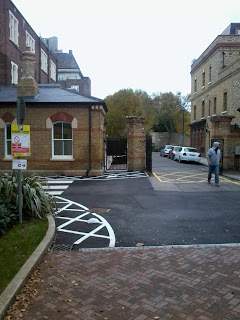 As far as I can see the express purpose of the crossing is to try to get pedestrians to walk further than they need to and to seek to absolve responsibility from drivers in a 5mph cul-de-sac should they manage to run someone over, like the bloke in the photo below who is using the logical pedestrian route to enter the enclave unless you want to use the door for muscle building as a Bullworker alternative.
Rather than a wide, gentle ramp to provide a link for pedestrians and cyclists, a flight of steps and a narrow, twisting ramp with a blind corner  has been installed. Given the foul A-road alternative  it's hardly surprising that a number of cyclists take this calm back route, though it clearly hasn't been designed for this purpose. 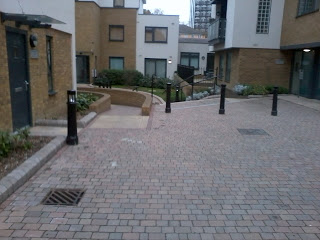 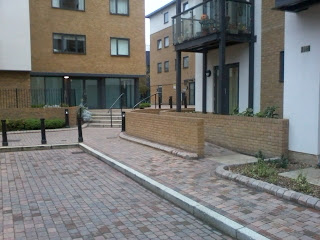 The pavements are very narrow given such a volume of available space. I wouldn't consider the ramp, shown above which descends to the pavement in the photo below with a dropped kerb some way along, to be very wheelchair friendly. 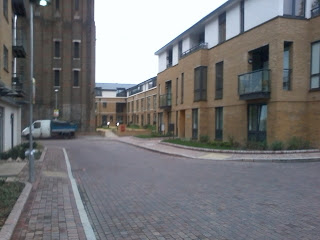 All in all, it's a pretty dire example of a 21st century inner-London development.
Posted by Charlie Holland at 16:22