Bus stops rather than a bus station at Vauxhall?

The Vauxhall, Nine Elms, Battersea exhibition at Market Towers tomorrow afternoon is worth a visit. In particular the presentation from Farrells Architects who Lambeth appointed to come up with a framework for Vauxhall. Farrells propose ten urban design principles:
1. Create a clear and legible mental map 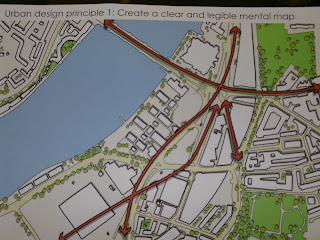 2. Reconnect the place to the river 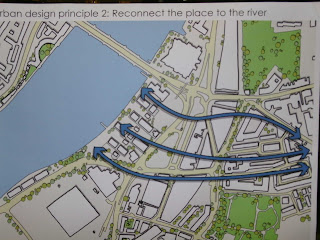 3. Something along the lines of good walking and cycling routes I think (dodgy camera work to the fore). 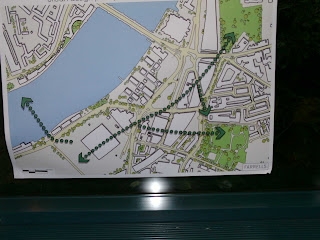 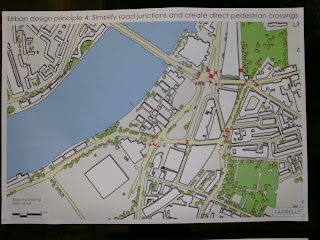 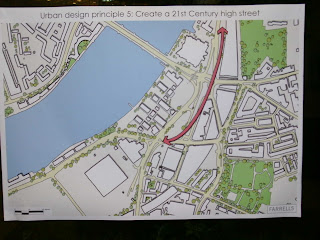 6. Create a new urban square as a focus for activity. 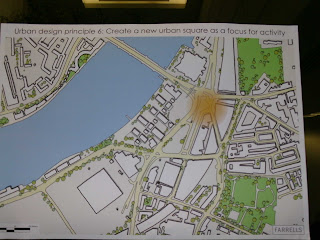 7. A tall building cluster is being created without sufficient thought for the 'place' 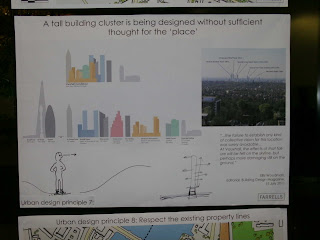 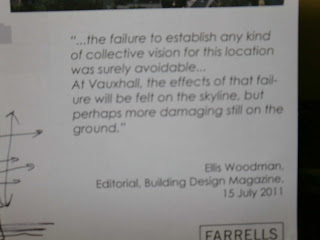 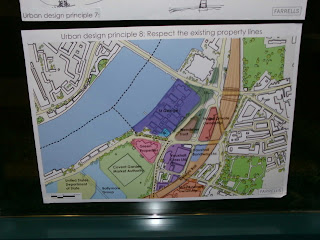 9.Bus Stops rather than a bus station. 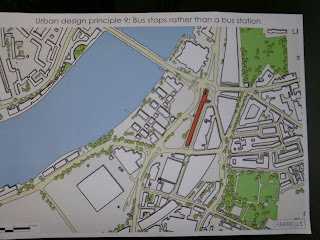 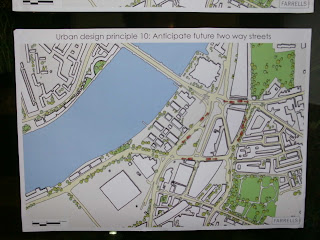 There's a very large model of the Vauxhall, Nine Elms, Battersea area. A small part of it, below, shows Vauxhall Bridge and to the left the aspirational, though seemingly very narrow, pedestrian/cycling bridge. There's no firm detail on the bridge but costings are being obtained and it's intended, should it happen, to be a landmark. I'm nervous that the designers will skimp on the width necessary to make it a really useful walking and cycling bridge. It wasn't known if it was intended to be shared space or segregated. 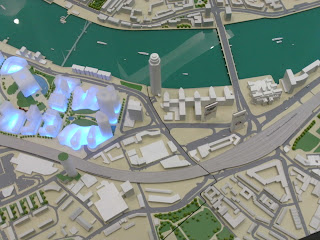 TfL were present with a chap who could win prizes for understatement, using language along the lines of 'not very good for cyclists' when describing the Gyratory and 'fairly poor' when describing the existing on-pavement farcility on Nine Elms Lane. They hadn't any plans to show what the cycling provision would be down the line but told me Nine Elms would have shared, but wider, bus come cycle lanes, and wider pavements but with no cycle lane on them; the Linear Park will be cycleable along the length, with shared use rather than a segregated lane for cyclists and it's not intended for commuter cycling; the Riverside Walk will also be for pedestrians and cyclists.

As for the Gyratory, there was still a clear 'Boris' message coming across of the need to allow all options equally rather than prioritising active and public transport over the private car. The TfL chap said they don't have models of the non-essential motor traffic but could easily do that. One to ask for.

It's clear to me that action to make the Vauxhall, Nine Elms, Battersea Opportunity Area great for cycling and walking must start right now, even in small ways while the grand plan is worked on. TfL has shut the shared use pavement under the railway bridge. Rather than helpfully reallocating the nearest of the multiple motor traffic lanes for pedestrians and cyclists to use, Vroom-Vroom TfL send you on a right old dog leg of a diversion. So last century, like the gyratory itself. 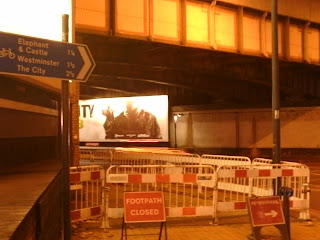 Posted by Charlie Holland at 22:26