Boris and TfL: Lack of will or institutional malaise?

The deaths of two cyclists at the Bow roundabout cycle superhighway within a month has forced questions about how far TfL will go to facilitate the safe movement of cyclists.

Not very far was the answer when they repainted the existing but unsigned Elephant and Castle bypass to make it a cycling superhighway.

Recently I commented on the needless mingling of HGVs and cyclists at the approach to the E&C cycling bypass. It shouldn't have been beyond the capacity of TfL to make a short section of bus and cycle lane 24/7 rather than 7am - 10am weekdays; instead general traffic can legally gatecrash the lane for 92% of the week. TfL chose to keep the emphasis on general traffic and not make the change.

Below is another example of general traffic having priority over safe routes at E&C: 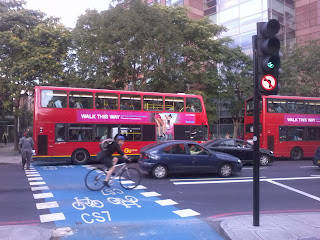 On Saturday's Tour du Danger  we wanted to experience the Elephant & Castle northern roundabout, rather than the cycle superhighway. We turned off the roundabout into London Road, which has a useful and popular bus and cycle lane that runs towards Blackfriars Road.

The dismal truth is that you can't use the cycle superhighway (Princess Street at this point) to turn  into the bus and cycle lane on London Road because, as the photo above shows, this desirable left turn is not allowed from the superficialhighway!

What's the reason for having cyclists brave the roundabout rather than use the cycling bypass to enter London Road? According to TfL (my bold):

The reason is that the cycle phase and (pedestrian) crossing phase operate at the same time here, and left turning cyclists would be in conflict with peds crossing on green man. We looked at changing this, as the northbound left turn is a popular one. But unfortunately the southbound lanes on London Rd are still open to general traffic, and get very congested at peak times, meaning that running a ped phase and cycle phase sequentially rather than concurrently would mean traffic backs up and blocks the bus stops, affecting journey times unacceptably for bus passengers and motorists.

In fairness to TfL's cycling superhighway team they wistfully hope for better years down the line:
I would hope that when the plans for E&C north roundabout come to fruition in years to come, that this can be changed.

The powers at the top of TfL can't be allowed to prevaricate like this. They need to build proper superhighways NOW, not years down the line, and accept that providing safe space for those who wish to cycle means reducing the huge amount of space and preference currently given to the CO2 emitting, polluting, noisy, and space-wasting motorist.
Please reserve Saturday 17th March in your diary now for the 2nd Tour du Danger when over 1000 cyclists, adults and children, will cycle to the Olympics to press TfL for proper not superficial space for cycling across London.

Posted by Charlie Holland at 08:42