Forward the Light Brigade! Into the valley of death 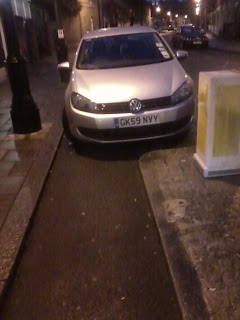 Cardigan Street's entrance-filter for cyclists pays homage to the 'Charge of the Light Brigade' at the Battle of Balaclava in the Crimean War.

You can imagine the desperate situation that the Cavalry, led by Lord Cardigan, found themselves in as they charged towards the enemy, into the valley between the Fedyukhin Heights and the Causeway Heights.

As Alfred, Lord Tennyson, put it:

'Forward, the Light Brigade!'
Was there a man dismay'd?
Not tho' the soldiers knew
Some one had blunder'd:
Theirs not to make reply,
Theirs not to reason why,
Theirs but to do and die:
Into the valley of Death
Rode the six hundred.

The car appears to be parked quite legally with its wheels within the white line. 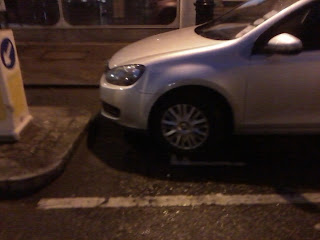 Posted by Charlie Holland at 18:08