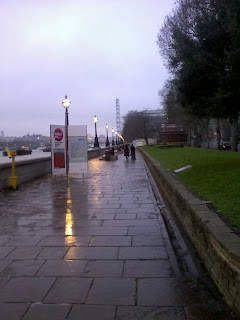 The Albert Embankment where cycling is now banned, on 22 Dec at 3.30pm, with plenty of space for pedestrians and cyclists as usual.

Boris Johnson, Mayor of London and chair of Transport for London, has voiced his opposition to a ban on cycling on the Thames Path along the South Bank.

Green Party London Assembly member Jenny Jones recently tabled a question asking the Mayor of London whether he supported a ban on cycling on part of the South Bank.


"TfL does not believe that cycling should be banned along the South Bank," replied Boris Johnson.

"TfL's response referenced my target to increase cycling by 400 per cent by 2026, to improve cycle safety, and the importance of improving the permeability for cyclists in central London, including in the Waterloo area."
Posted by Charlie Holland at 16:05