Cycle Superhighways after the snow 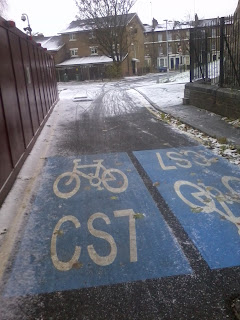 The central London part of Cycling Superhighway 7 I used around 8.45 this morning was generally good with a slightly tricky bit on the off-main-road section around the Elephant and Castle bypass.

I'm guessing that the heavy motor vehicles using the CS7 mash the snow out of existence...or is it that these roads are better gritted?

Cycling Superhighway 3 was a different situation. Clearly some grit had been dumped on the CS at Cable Street: 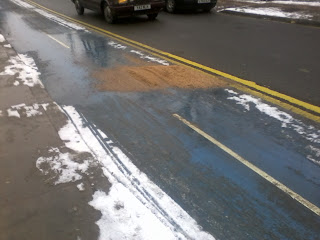 But generally it seemed pretty treacherous compared with the road (except I was travelling in the opposite direction to the one-way traffic!) 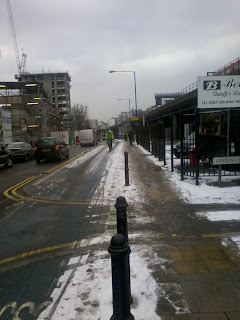 Further on, past East India Dock and it looked like this (CS3 is on the pavement at this point!!): 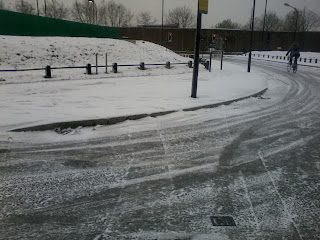 I moved to the snow and ice free dual-carriageway A13 and mixed it with the fast lorries and cars instead.

Should we expect the Cycle Superhighways to be functional after a little snow? Should clearly signed diversionary routes be put in place on main road, maybe with temporary speed restrictions imposed, if they're not meant to be useable? Or should we not find a different way to commute when it's snowed - maybe taking the car?
Posted by Charlie Holland at 12:48