Throwing £31m away each year 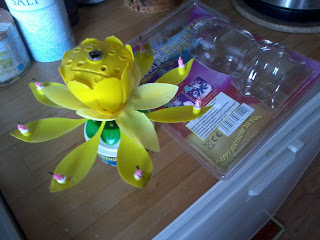 At a birthday party last weekend I was gobsmacked when this sparkling, musical birthday fountain was produced only to be thrown away about one minute later. Once lit, the flower sparkles whilst the petals slowly open lighting the candles around. At the same time, the "Happy Birthday" tune starts playing. There were no details on the packaging about replacing the pyrotechnic so this contraption is clearly intended to be used once then thrown away, batteries (yes, two) and all.

Lambeth Council is working out what services are for the axe as it's being forced to make cuts of £79m over the next 4 years.

It costs £31m a year to collect and dispose of Lambeth's rubbish (£113 for each of the 272,000 residents) so it's clear to me that the sanest way to protect essential services is to cut down the amount of crap we mindlessly consume.

What's this got to with riding a bike? Well, first of all we'll have fewer lorries on the streets...

Secondly, it gives me a chance to mention Lambeth Freecycle - the Yahoo group for giving and collecting unwanted items. When we use it we normally give preference to people collecting on foot/public transport or by bike.

Thirdly, if you're reading this shortly after it's been posted, there's still time to vote for the Council to provide funding to kickstart the Brixton Reuse Centre (including bicycles). Deadline for voting is midnight 1st December.
Posted by Charlie Holland at 21:41