The massive population growth planned for the Vauxhall, Nine Elms, Battersea area comes at the same time as governments and major corporations strive to reverse our destruction of the earth's biodiversity, control our carbon emissions, fight diabetes and heart disease and so on.

The pressure is clearly on the powers to get ordinary people - mums and dads, children, pensioners and commuters - to choose walking and cycling over powered forms of transport for journeys of up to about 6 to 10 miles. 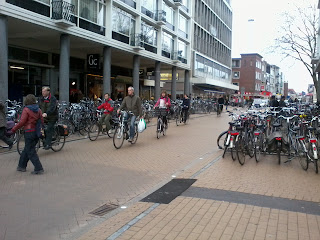 So, what determines where ordinary people like to ride a bike and where they don't? What changes could be made to our infrastructure to increase cycling over motor vehicle use?

The DfT's experts have identified five Key Design Features, and it is illuminating to contrast the Thames Path (TP) with the parallel National Cycle Network Route 4 (NCR) for the stretch from the Albert Embankment to Gabriels Wharf.

Below are my comments and my scores for each of the features, out of ten.
The photos on this page save two (guess) are from NCR 4 whilst the Thames Path can be seen here

Coherence : The cycling infrastructure should form a coherent entity, linking all trip origins and destinations; with a continuous level of provision;
TP -  The Thames Path runs smoothly next to the river and passes the front door of the London Aquarium, London Eye, RFH, NFT, NT, and Gabriel's Wharf (doesn't pass the front door of St Thomas' - in fact I don't think you can get in at all from the path!). Bridges easy to spot and underpass, though access to them may involve steps. Score: 9
NCR - Random bits of road (some A road, some B road, mostly fairly to truly horrible), pavement and occasional cycle lane. Takes you to the back door of most trip destinations. Very poor clarity of route. Score: 2 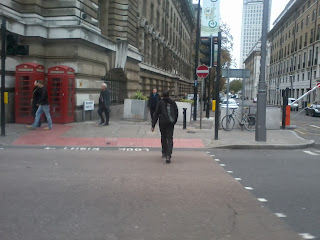 Directness : Routes should be as direct as possible, based on desire lines, since detours and delays will deter use;
TP - Can't beat this route to follow the river to major tourist draws and proximity to bridges. And, no roundabouts or traffic lights . Score 9
NCR - Fairly direct but only once you've worked out the route. Lots of faffing at roundabouts plus traffic lights and a toucan crossing. Score 4 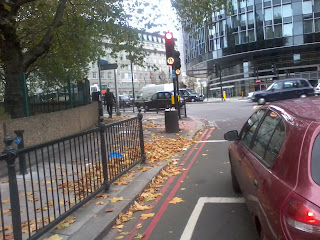 Attractiveness: Routes must be attractive to cyclists on subjective as well as objective criteria. Lighting, personal safety, aesthetics, noise and integration with the surrounding area are important;
TP: Motor Vehicle free, Quiet, unpolluted, well lit, safe (no stats showing any cyclist or pedestrian Killed or Seriously Injured in collisions), great views, Score 10
NCR:  Noisy (crowded with huge lorries, buses and cars etc.), Polluted (black cabs by the dozen), Unsafe (no parents have yet volunteered their children to take up my challenge to ride it) and statistics show several cyclists were seriously injured or killed on it between 2000-2008. Anyone know a source of pedestrian KSI stats for this part of the route?), Good integration with surrounding area if you're assertive enough to cycle like you're driving a truck. Score 1 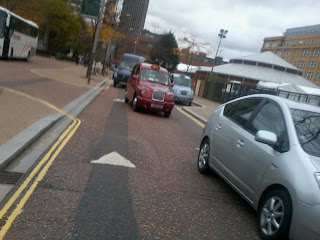 Safety : Designs should minimise the danger for cyclists and other road users;
TP: Comments as above, particularly cyclists segregated from motor traffic. Need for signage to encourage considerate cycling and emphasise pedestrian priority, plus enforcement action against reckless cyclists. Score 9
NCR: Comments as above. Cycle lane along Lambeth Palace Road is only 2/3rd the recommended minimum width and anyway drivers can use it too as it's only advisory. There are some other well hidden cycle facilities. The speed limit is nominally 30 when 20 would be more reasonable. Poor enforcement of speed limit. When was the last time you saw a carefree, car free family riding along Lambeth Palace Road? Score 2 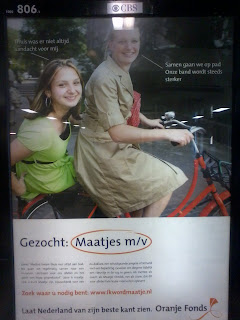 and Comfort: Cycle routes need smooth, well-maintained surfaces, regular sweeping, and gentle gradients. Routes must be convenient to use and avoid complicated manoeuvres and interruptions.
TP: The density of pedestrians at certain times makes the route inconvenient to use and a parallel cycle route of equivalent quality would appeal to the overwhelming majority of cyclists. During much of the time it is practical to get off and push the bike for the little bit which is densely populated before cycling the rest. Score 3 or 8

NCR: The gradients are gentle (not quite as gentle as TP). The roads are poorly maintained (all that motor traffic on Belvedere Road has severely damaged the traffic calming measures). As for convenient to use without complicated maneouvres and interruptions - don't get me started; just try it on a bike yourself! Score 3
Total score out of 50:
Thames Path - 40 or 45 depending on how many pedestrians are using it
National Cycle Route - 12

If I was a member of government or a local business (or Hospital Trust) and I wanted to get more ordinary people walking and riding bikes more often, I'd be busting a gut to bring NCR 4 up to the exemplary standard of the Thames Path while enforcing considerate cycling on the latter.

Let's see what the finalised South Bank and Waterloo Cycling Strategy has to say on the subject when it comes out.

Posted by Charlie Holland at 00:17