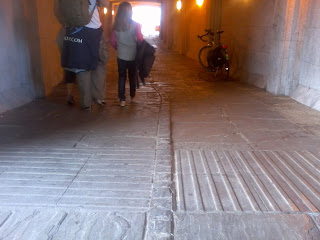 This weeks Lambeth Life states that the London Eye is the most popular paid tourist attraction in the UK, with 3.5 million visitors annually.

Before developers are given permission to build the council negotiates something called S106 Funding with them -  a charge to mitigate the impact of a development. For example if a developer wants to build 500 houses they may be required to build a new school to cater for the influx of new residents.

A clearly forecastable impact of permitting the building of the tallest Ferris wheel in Europe opposite Big Ben would be hugely increased numbers of people using the Thames Path and one trusts that S106 money would be used to ensure continued access to the rightful existing users of the Thames Path, such as cyclists (see the markings in the tunnel above).

Instead, in a Kafkaesque nightmare, London Eye S106 money has been used to commission the South Bank Employers Group, now chaired by the man who runs the London Eye, to write the South Bank and Waterloo Cycling Strategy, which in its draft 100 page state recommends banning cycling here.

Wouldn't it be better for that S106 money to be used on widening the Thames Path, for example by creating a cycle track on the St Thomas' Hospital space adjacent to the Albert Embankment part of the Thames Path. 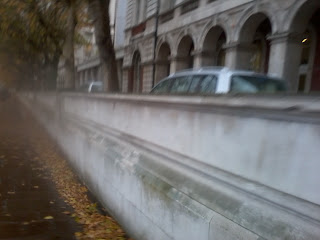 Posted by Charlie Holland at 13:58