I promise I'm not making this up 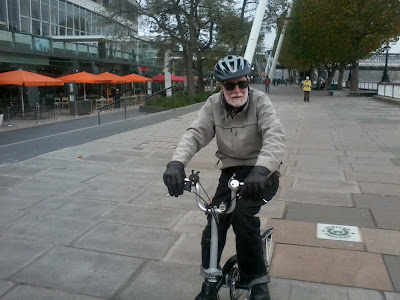 On this morning's pootle along the Thames Path I stopped two cyclists, of the four or five I saw (none of whom wore Lycra should my readers fear a bias), to ask them their views on a potential ban on riding their bike there.

The first I asked is in the photo above, on his way to meet his wife. He asked where he would have to ride instead. When told he would be expected to ride on the road he volunteered that he was 78 years old and suffers from Spinal Scelerosis, and that such a move would force him to switch from his bike to a wheelchair.

The second man I spoke to, but failed to take a presentable photo of, was equally aghast having been knocked off his bike twice in the past year by cars on the road.

Clearly these are just two anecdotes but, as they're from a sample of two, I hope they will encourage the powers that be not to impose a ban without thinking through the consequences very carefully.

Both kindly agreed to me including their replies in my blog, a question I asked only after I'd elicited their views.
Posted by Charlie Holland at 13:51