A new drinking fountain for London 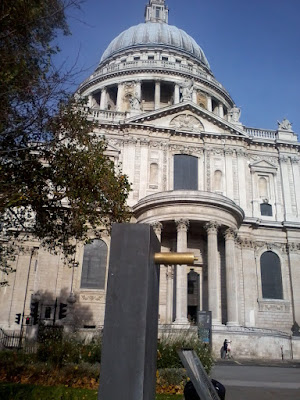 An officer at Lambeth Council's Sustainability Forum this week alerted me to London's first fully approved drinking fountain in 30 years!

The fountain is at the northern end of the wobbly bridge, alongside St Paul’s Churchyard, near the City Information Centre and opposite St Paul’s Cathedral.

It has been installed with the approval of Thames Water, the Water Regulations Advisory Scheme and the Drinking Water Inspectorate. There is a thorough maintenance programme which includes daily cleansing and regular tests to ensure the water is of the highest quality.

This is a trial installation as part of a proposed scheme to introduce new drinking water fountains around the Square Mile and restore the City’s historic drinking fountains. Depending on the success and use of the fountain it could lead to a roll out of similar drinking fountains across the City during 2011.

I therefore urge you to use it and pass on word of its existence far and wide.

A possible design flaw is that it's so discrete as to not shout 'DRINKING FOUNTAIN - USE ME' - something I wondered about another recent fountain in Hyde Park. I can't imagine Evian being so shy in asserting their presence. 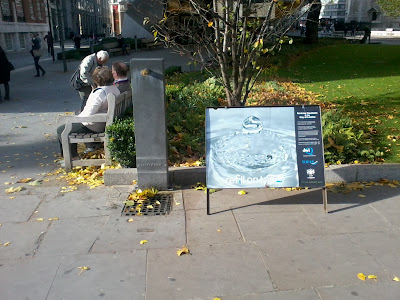 A further minor quibble is that it's more of a public tap than a drinking fountain as it's been designed to refill water bottles. and the water flows quite forcefully so it's not ideal for sticking your mouth under.

However, the key point is that visitors to this bit of London have a working, hygienic source of water that isn't in a one-use container and isn't delivered by thundering lorries. I imagine it's been selected as being pretty vandal proof and easy to maintain. Let's hope that hundreds are rolled out across London. Locally, Waterloo Station and the South Bank would be choice places to install them.
Posted by Charlie Holland at 09:28