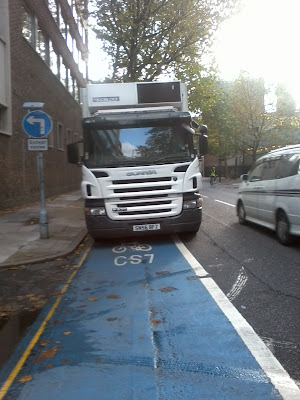 We all make cock-ups at some point and some may argue for TfL to be cut a bit of slack for assuming, as we cyclists have, that if it looks like a yellow line and a mandatory cycle lane then that's what it is. A quick slap of blue paint over the top and you've got a whizz-bang Cycling Superhighway.

TfL have just apologetically been on the phone to explain that it turns out to have been a faux green cycle lane outside Waterloo Cars on Southwark Bridge Road, so it's now a faux Superhighway.

You see, wardens can't enforce no parking there because in some way or other the old cycle lane wasn't correctly lined and signed, hence neither is the shiny blue one.

Apparently they've been on the case for a while now and promise it'll be resolved soon....

In the meantime, I can't resist the opportunity to invite you to sing the following, maybe replacing Napoleon with Boris in the lyrics


Little General Napoleon of France
Tried to conquer the world but lost his pants**
Met defeat, known as Bonaparte's retreat
And that's where Napoleon met his Waterloo