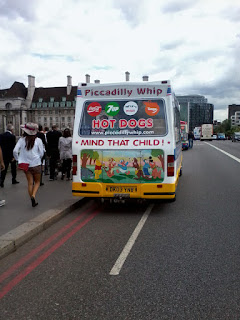 What would a permit cost for two ice cream van pitches on Westminster Bridge, twixt the London Eye and the Houses of Parliament, for several hours a day during the summer holidays?

A hefty amount I'll bet, not to mention being charged the on-costs of altering a Traffic Management Order and re-routing a red route, bus lane and cycle lane.

But what did it actually cost the owners of the two ice-cream vans routinely flouting the red route, bus lane and cycle lane this summer?

TfL reported to a local Councillor that 20 Fixed Penalty Notices (Traffic Offence) and 17 Penalty Charge Notices (Refusal to Move - Obstruction) were issued over a 53 day period covering half of July and all of August. One arrest was apparently made but I bet that no charges were made.

TfL don't say what the penalty charges are on their website but, from a Google, I believe the FPNs would be £50 each and the PCNs would be £120 (reduced to £60 if paid within 14 days).

So the going rate for a top London pitch, with no requirement to pay council tax on it, is £19 a van a day.

That's a very attractive proposition. I wonder how much ice cream vans cost and whether the competition are aggressively protective of their dodgy pitches?
Posted by Charlie Holland at 21:33