How do Waterloo Cars get away with it? 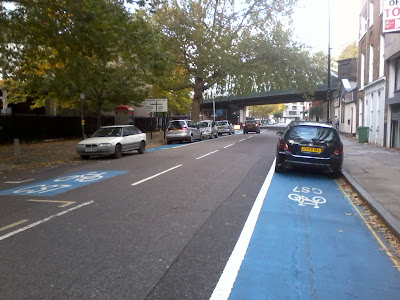 I resolved yesterday morning to take a more upbeat approach to this blog. The resolution was shattered by a blasted horn five minutes into my ride mid-morning.

I went northbound, past the blue mini-cab parking zone, on Southwark Bridge Road, unsurprisingly riding my bike on the main part of the highway, before stopping at traffic lights. Looking across the junction the cycle superhighway had a taxi parked in it and a van unloading. So I kept my road position across the junction to ride on the road, adjacent to the blue parking zone, only to get a blast of the horn from a dumper truck's moronic driver behind me presumably for having the gall to be in his way rather than ploughing into the back of the obstructions.

Time for another photo of Waterloo Cars mini-cabs obstructing the mandatory cycle lane parked on a single yellow line and an attempt to find out if anything is being done about it. I phoned Southwark Council and a highway planner told me the yellow line applied from 08.30 - 17.30 Mon-Fri; that the mandatory cycle lane would certainly have the same hours; that it was a parking offence to park and a traffic offence to enter the cycle lane. He advised that both offences were decriminalised and Southwark was the enforcing agency but that they don't take action against the traffic offence of entering the cycle lane. 5 minutes observation would be the minimum normal observation period for a warden to confirm that someone was parked rather than loading/unloading.

Even though it is a cycling superhighway, as it is a borough road TfL don't have any enforcement powers. Except, that "Any person who operates private hire vehicles in the London area must be licensed by Transport for London (TfL)." so please TfL, can you take Waterloo Cars' licence away. (The relevant TfL department has just moved in Palestra on Blackfriars Road so are around the corner if they want to check for themselves).

Meanwhile, the next stop is the Head of Southwark's Parking Enforcement to see what is going wrong with their enforcement. 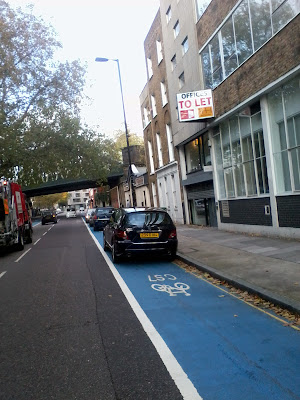 Posted by Charlie Holland at 11:27