National Cycle Route 4 is a No Cycling Zone

The tourist axis of London has shifted and the South Bank is firmly within the central London theme park with world class attractions from Westminster to Tower Bridge.

Attractions, such as the Brunel Museum increase the reasons to follow the river eastwards to Greenwich, the Dome and the Thames Barrier. Westwards will see the new American Embassy, the 'new' Battersea Power Station (planning permission approved this week), joining Battersea Park with its peace pagoda and Hampton Court.

You couldn't choose a more perfect place to have a sensational cycle route that families and unaccompanied children, Londoners and tourists, can follow along the Thames without the peril, congestion, noise and pollution of motor-vehicles.

In name it's there - National Cycle Network route 4 - but the reality of it is grieviously at odds with its grand title.

Why haven't the planners, politicians, health service and TfL made an awesome cycle route a priority? They know the reality of peak oil; they know we and our children are unfit, diabetic and obese; they know we need to reduce CO2 and particulate emissions.

But instead of making progress, the ambitions of our local politicans appear to be limited to banning cycling from the Thames Path, with our MP of the view that her patch of National Cycle Route 4 is excellent. 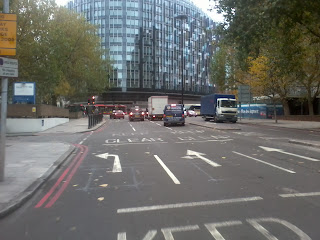 A week ago I emailed a few local parents to ask if they'll send their children out to considerately cycle the National Cycle Network route 4 from Black Prince Road to Gabriel's Wharf, returning via the Thames Path, to get their comments on each.

This is the email I received from one parent, which has been echoed by every other parent I've spoken to:

I wouldn't dream of allowing my children to cycle unaccompanied round the roundabouts at Lambeth or Westminster Bridge - I consider them far too dangerous. In fact, I never cycle around the junction at Westminster Bridge myself - too many lorries!
Posted by Charlie Holland at 11:16