There is a cycle lane (above) along the Albert Embankment on the approach to Lambeth Bridge. Although well below the recommended width, it's inviting to cyclists - after all it's been designed for their benefit and has a solid white line along the edge meaning motor vehicles aren't allowed in it. A further inducement to use it is that the criminally narrow cycle lane (that motor vehicles aren't allowed in) conveniently continues over Lambeth Bridge towards Westminster (below, looking towards Lambeth). 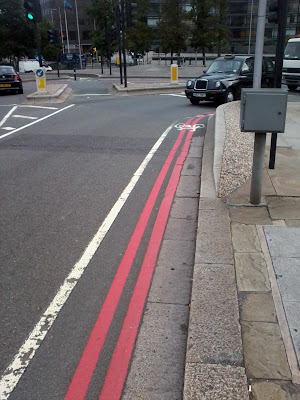 Here's a cyclist using the cycle lane, with a van in its lane, going around the corner together. Ahh, bless them. 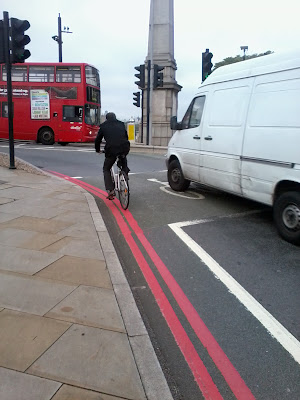 Now, to be pernickety, the lane isn't really continuous (just like a Cycling Superhighway really). There's a tiny section, just a few feet long, where the cycle lane disappears. It's here, where the potholes are and the high edge kerbing. 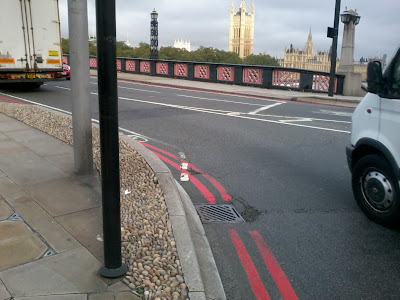 Funny, I didn't think cycles had enough weight over the axles to cause potholes. Now, what could cause potholes here, where the cyclist's flow line is, in this incy-wincy distance between mandatory cycle lanes?

Maybe one of these going round that corner could cause a little bit of damage?

So, either TfL could seriously attempt to help cyclists at this crucial point (eg having a segregated lane), or they could ignore the issue save an attempt to limit their legal liability by carefully not painting a white line for a few feet. Here it's clearly the latter.
Posted by Charlie Holland at 17:10