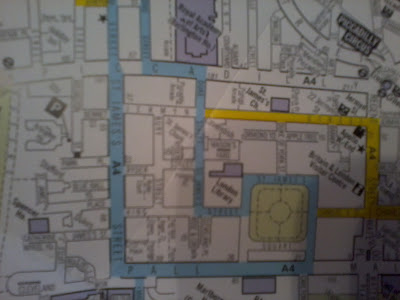 TfL have updated their Cycling Guides (aka Maps) for 2010/11 and the one entitled 'Cycling in Central London' (aka cycling for Boris biking tourists) omits to show that one or two streets, oh alright, VERY MANY streets in this area are one-way.

Is this because:
a) TfL consider that most cyclists will cycle the wrong way on a one-way street so the information is irrelevant,
b) the Central London boroughs have told TfL that they'll make all their streets two-way for cyclists by 2011
c) TfL daftly didn't ask local London Cycling Campaign groups to review the maps at the draft stage.

I hope that b) is the correct answer, but my money's on c).
Posted by Charlie Holland at 21:57