Force change in the City 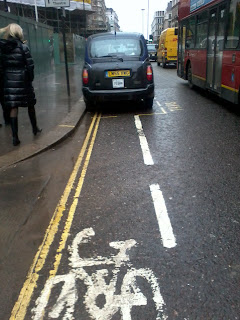 The motor traffic sodden Square Mile has produced its draft Transport 'Local Implementation Plan' (LIP) for consultation and I strongly urge you to spend a few minutes bunging an email pointing out that the City of London is, by and large, not a pleasant place to cycle in.

You should also express doubts that the draft LIP is going to achieve the kind of modal shift to cycling that they intend. It's probably also worth pointing out how dismally they did against target with their last LIP.

The photo above, with a cycle lane running straight into the back of a taxi rank, shows the City's typical way of supporting all transport modes equally. And anyone who has ever tried to find their way from Cycling Superhighway 3 to Cycling Superhighway 7, both ending by the City, will realise what utter disregard the City of London's authorities have for making cycling an easy way to get around.

You can either
a) lie back supinely and let them continue to waffle about targets for cyclists while doing bugger all meaningful to achieve it,
or
b) you can email them expressing your anger at their failure to effect real change to date and emphasise the need for them to invest in ways of making active travel, walking and cycling, the mellow way to get around.

Everything you need (including a draft email to adapt/use) is on the excellent Cyclists in the City blog. Please go there now and write that email! It'll be good practice for Lambeth's LIP, the draft of which is due out shortly.
Posted by Charlie Holland at 14:58