Kate Hoey pledged support (but did she mean it?)

In the run up to the last election Kate Hoey signed up in support of the 'Vote Bike' Manifesto written by CTC, the UK's National Cyclists' Organisation. The manifesto has six key points, one of which is:

More and better opportunities for recreational and off-road cycling including the appropriate opening up of green spaces, forest land, rights of way, waterways and sections of Britain’s coast.

I hope that my blog posts over the past months have shown that it is completely inappropriate for 'No Cycling' signs to be put up on the Thames Path, which has a long history of shared use. I've even been told that the tunnel under Westminster Bridge came about following pressure from cycling campaigners. You can see by the markings that the route is intended to be shared: 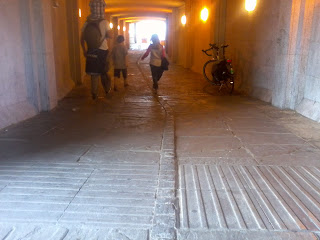 I call upon Kate Hoey to honour her election pledge and fight for the ban on cycling, imposed since the election, on the Thames Path (the off-road cycle path by the Thames waterway) to be rescinded.
Posted by Charlie Holland at 19:29